How to Add Grain to Photos on PC

Make Your Photos Grainy with PhotoWorks!

How to Add Film Grain Effect to Photos

The film age in photography has long gone by now and everyone would expect that all the disadvantages of it have disappeared as well. But what do we see instead? Photographers seem to get bored with perfectly smooth shots, and grainy photos are back on trend again. To make those old-like shots, you won't need to have a film camera - a film grain filter is now available in many decent image editors. Keep on reading and you will learn how to simulate film grain with PhotoWorks software.

In basic words, film grain is the optical effect appearing in photo film and caused by small dye clouds of metal silver. One can see this kind of granularity in a film photograph - the larger the image is, the more noticeable the texture gets. However, the crystal grain structure does not tend to 'eat up' the final image quality. Digital cameras are unable to exhibit film grain. The closest equivalent of it is digital noise.

Let's distinguish between film grain and digital noise. Noise is mostly provided by high ISO settings, high temperature, a long shutter speed, a small sensor of your camera and a low lit scene. Although it looks similar to grain, the term ‘digital noise’ refers to visual distortion of image details, it's more like an issue to correct. If you experience it now and then, check out the tutorial on how to reduce noise in photos. Unlike film grain, noise degrades the quality of a picture - the pattern of colorful pixels make the image look fuzzy. You can see the difference between noise and grain on the photo below. 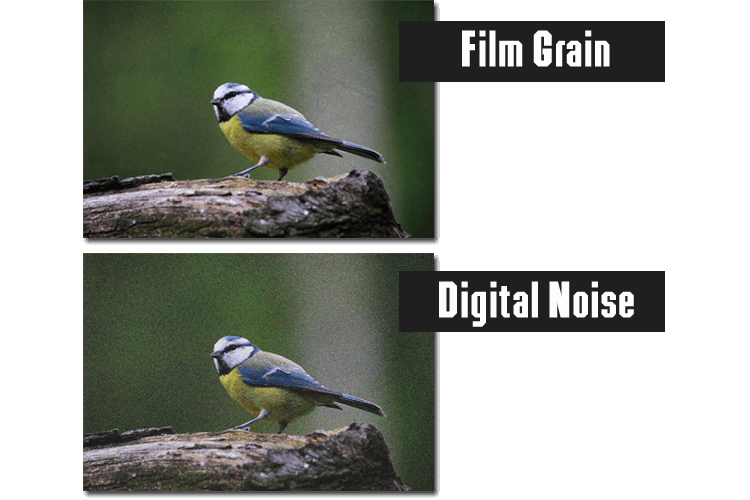 How to Make Pictures Grainy in PhotoWorks

No wonder that grainy photos won great popularity in the last couple of years. Professional photographers say that grain makes pictures deeper, matter, more vivid and pleasant to the eye. 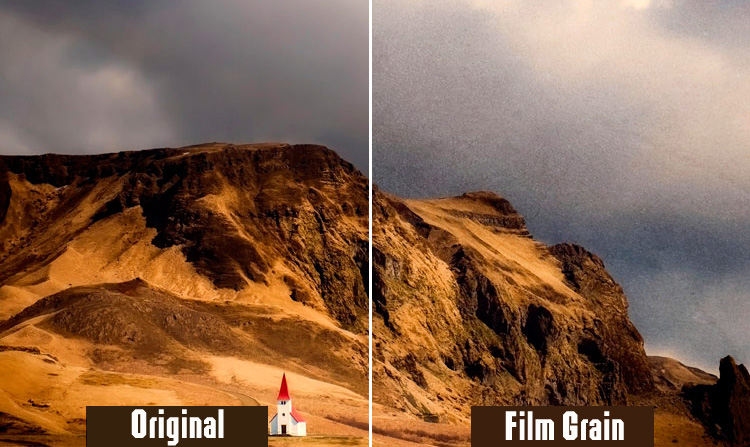 So, how to stylize your digital photographs with no need to use a film camera? Of course you can obtain a film grain Photoshop plugin but there’s a faster and easier way to make your pictures grainy - PhotoWorks software. With it, you won’t need complicated camera manipulation in order to add grain to your pictures - applying this filter in the program takes just a couple of mouse clicks.

Step 1. Open the Photo to Work On

Download the automatic photo editor for PC from the official website and import the photo you want to edit. 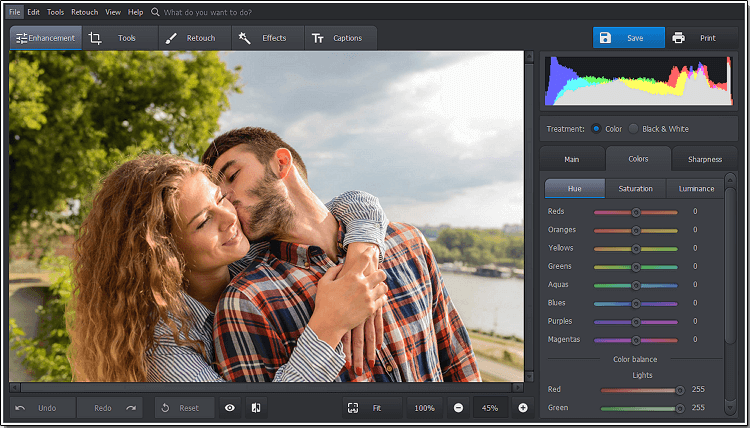 For a start, open your photo for editing

Move to the Tools tab and click the Grain button from the toolkit on the right. 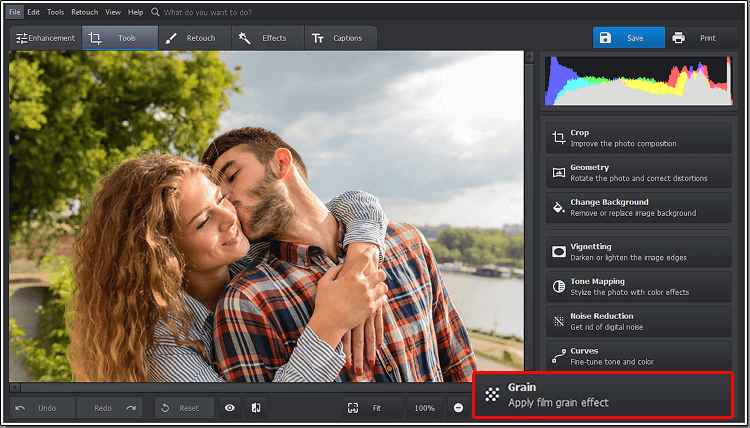 Choose the Grain option from the toolkit

There’s no single rule on how to apply the grain filter to an image so just drag the Amount slider to the right to increase the effect till you like it. 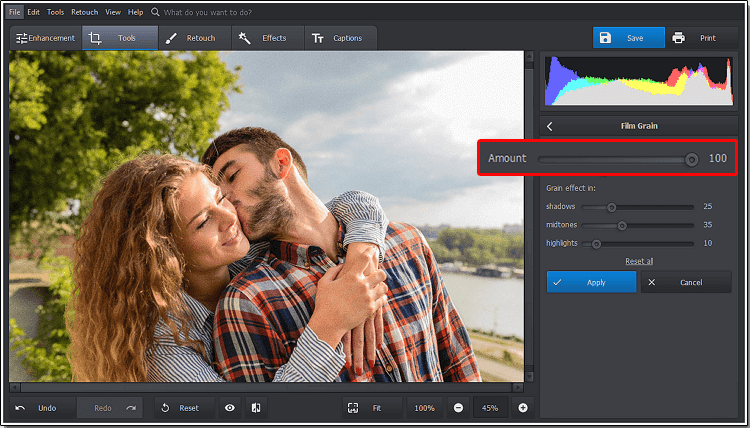 To intensify the grain effect, set the Amount slider at the maximum

Now, adjust the effect - set the grain size, increase the effect in shadows and highlights to texturize the picture, and decrease it in midtones to avoid skin degradation. 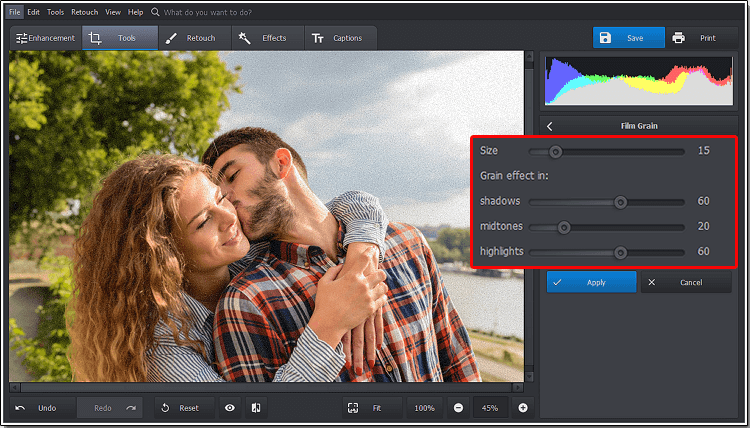 Step 5. Save the Grainy Photo

Now your picture looks like an old photo and you can save it. To do it, apply the changes and click the blue Save button. 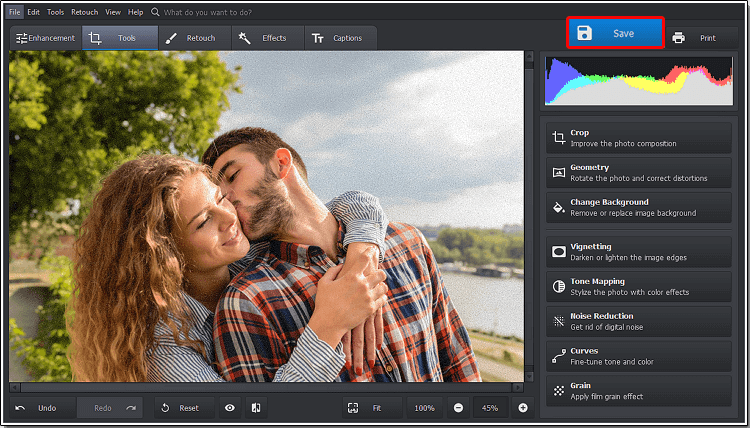 Compare the result with the source and click the Save button

Film grain can totally change your photos and turn their smoothness into a wonderful texture. Looking at grainy photos, you can nearly feel it. Want to see it yourself? Take a glance at the examples below.

Put Life Into a Portrait

You won’t be able to drag your gaze away from a portrait with a film grain texture on it. Granularity helps get rid of that plastic face look and gives the sense of the model’s presence and the reality of the whole scene. Decrease the grain effect degree in midtones so it doesn’t affect and spoil the natural skin color. 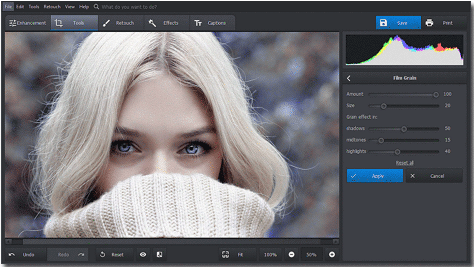 Make a Landscape Stand Out

Film grain overlay will make nature views really eye-catching. Try it on a gloomy cold picture with some fog in it to boost the mysterious look. Add the film grain effect to a picture, then increase it's amount in midtones and decrease it in shadows and highlights. Film grain applied to your landscape will make it look as if it was retouched by a professional. 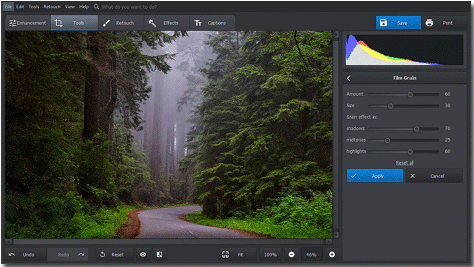 There is hardly a better picture for a grainy photo effect than a black & white one. You’ll achieve the impressive depth and at the same time eliminate all the distracting colored pixels. Set the effect amount at the maximum and don’t be afraid to use large grains - the photograph will become even more attractive. 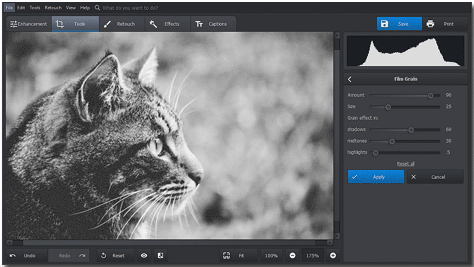 Apart from the film grain effect, the program offers you more ways to add a retro touch to photos. Want to know how to make your pictures look vintage? With PhotoWorks software, you can apply instant retro filters, create a vignette or use tone mapping vintage textures and no one will tell those are modern digital images.

Give your photos a professional look! 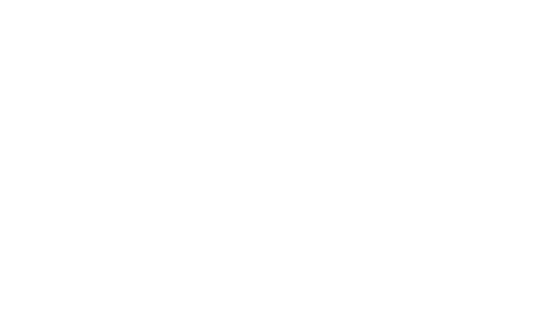